Are Inventions Inevitable? Simultaneous Invention and The Incremental Nature of Discovery

Thomas Edison invented the light bulb in 1879. What if he had never been born, Would we still have light bulbs? And would they still have been invented in 1879? It turns out that this is not just a philosophical question and the answer is yes, the light bulb would have been invented at roughly the same time. We know this because at least 23 other people built prototype light bulbs before Edison1, including two groups who filed patents and fought legal battles with him over the rights (Sawyer and Mann in the U.S. and Swan in England)2. 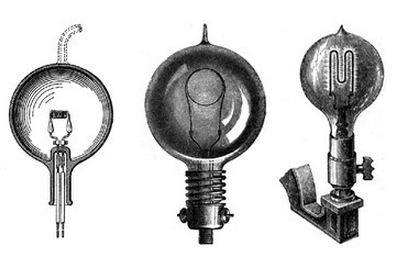 Independently invented lightbulbs from Edison, Swan, and Maxim. Image from “What Technology Wants” by Kevin Kelly.

This is not a strange coincidence that happened with electric lighting, it is the norm in both technological invention and scientific and mathematical discovery. Newton and Leibniz independently invented calculus, Alexander Graham Bell and Elisha Gray both filed a patent for the telephone on the same day — within three hours of each other — and sunspots were simultaneously discovered by four scientists living in four different countries. The list of simultaneous independent inventions includes the airplane (2 people), the steamboat (5 people), photography (2 people), the telegraph (5 people), and the telescope (9 people). In science and math it includes decimal fractions (2 people), the theory of natural selection (2 people), the discovery of oxygen (2 people), molecular theory (2 people), and the conservation of energy (4 people)3.

A study by Ogburn and Thomas4 in 1922 produced a list of 148 major inventions and discoveries that were made independently by two or more groups at the same time. A similar study by Merton5 in 1960 led him to conclude that “the pattern of independent multiple discoveries in science is in principle the dominant pattern, rather than a subsidiary one”. Lest you think that only the landmark discoveries covered in these surveys are subject to multiple invention, recent work by Lemley6 suggests that 90-98% of patent lawsuits are filed against independent inventors and not copiers. Even the idea that multiple simultaneous invention is the norm was advanced by multiple independent groups at the same time7.

All this synchronicity reveals something fundamental about the nature of invention. In popular culture inventors are romanticized as lone geniuses working in home laboratories who come up with completely new ideas — things that establishment thinkers initially dismiss as nonsense. But in practice, it just doesn’t happen this way. Most inventors add to a body of work that is built up by many people over decades. They rise to fame when their invention, one among many in a long chain, is a crucial step that finally enables a practical telephone, airplane, or mathematical proof.

In the case of the light bulb, Edison’s main contribution was a new filament made out of a certain species of bamboo that worked better than the carbonized paper used by Sawyer and Mann before him. The incandescent bulb — a resistive filament looped inside an evacuated glass bulb — had already been developed. Filament material continued to be improved upon by others after Edison’s work. Samuel Morse’s patented contribution to the telegraph was the application of efficient electromagnets for boosting the signal in the wire over long distances. The idea of sending messages over wires using electricity already existed in the world. Morse did not even invent these new electromagnets, but built on the work of Joseph Henry8.

Viewed in this light simultaneous invention is not so surprising. As Lemley puts it, “An isolated flash of genius could strike at any time, while the thirteenth step in a multistage inventive process is likely to come after the twelfth.” The incremental nature of invention has another fascinating consequence besides simultaneous invention. Since significant discoveries require a base of knowledge and tools that is outside the scope of any one person to create, new inventions only happen when “the time is right”. Given the knowledge and tools that exist at any one point in history there is only a finite set of inventions that are possible to create. These things lie within the “adjacent possible” — all those new inventions and ideas that are one step removed from what we already have. Steven Johnson describes how this played out for the discovery of Oxygen in 1774, which was done independently by both Priestley and Scheele9:

“To go looking for oxygen, Priestley and Scheele needed the conceptual framework that the air was itself something worth studying and that it was made up of distinct gases; neither of these ideas became widely accepted until the second half of the eighteenth century. But they also needed the advanced scales that enabled them to measure the miniscule changes in weight triggered by oxidation, technology that was itself only a few decades old in 1774.”

The invention of the steam engine was also only possible because of the work built up over prior decades. By the beginning of the 18th century “[t]he nature of the vacuum and the method of obtaining it were known. Steam boilers capable of sustaining any desired pressure had been made. The piston had been utilized and the safety valve invented”. After this, early versions of the steam engine were built by Savery and then Newcomen before James watt improved the engine yet again by adding a separate condenser and became known to history as the inventor of the steam engine10.

Taken together, all this suggests that inventions are inevitable. Once an idea enters the realm of the adjacent possible the supply of people who are smart enough to act on it is sufficiently large that the idea will quickly be discovered, often by multiple people: “given the electric motor and the train, is not the electric train inevitable?”s. Inventions are not pioneering feats of individuals, but the necessary results of a social process. Mix together people, technology, and the laws of physics and then stir for a decade or two. Out will pop a set of inventions that will expand the boundaries of the adjacent possible so that you can repeat the recipe.

This idea is supported by research into the inventions of early humans who were isolated on separate continents. If inventions are inevitable, then we would expect that each civilization would develop roughly the same tools and that they would invent them in the same order. Kevin Kelly summarizes this research in his book “What Technology Wants” 12: “Each technological progression around the world follows a remarkably similar approximate order. Stone flakes yield to control of fire, then to cleavers and ball weapons … The sequence is fairly uniform. Knifepoints always follow fire, Human burials always follow knifepoints, and the arch precedes welding.” When we invent new technology, we are not blazing a trail into the future, we are uncovering a path that was already there.

15 thoughts on “Are Inventions Inevitable? Simultaneous Invention and The Incremental Nature of Discovery”