As I mentioned in my last post, I am visiting Detroit this week. This city has long been a symbol of urban poverty, racial unrest and industrial decay. But recently there has been another story to tell — one of cheap land and creative opportunity. An article in Pluck magazine describes this new sentiment:

“Who isn’t invigorated by the prospect of buying a house for $10,000? The New York Times gushes about the proliferation of small, locally-owned businesses in Detroit, epitomized by Slows Bar B.Q. Oprah inspires housewives with stories of the city’s urban gardeners. Radicals talk about the prospects for organizing autonomous communities given the availability of cheap land and the lack of regulation.”

I traveled through the city on Monday to see both of its faces, starting with a tour of high tech businesses downtown and ending in the ruins of an early 20th century car factory.

Downtown Revitalization
I started my trip by taking a free walking tour of downtown from the D:hive, a local nonprofit organization that strives to attract and retain young talent in Detroit. They provide information and resources from their downtown storefront to build community and help new transplants find housing and job opportunities. The tour, offered weekly, takes a small group around the central core of downtown to see beautiful historic architecture that has been renovated to house new businesses that are moving into the city. The most high profile recent champion of Detroit is Dan Gilbert, the founder of Quicken Loans. As described in this Forbes article, Gilbert has invested hundreds of millions of dollars in the city, relocating Quicken’s world headquarters to a renovated tower in the center of downtown as well as taking advantage of a “skyscraper sale” (The 37 story David Stott building was on the market for $3.9 million in 2007 ) to purchase and refurbish 2 million square feet of office space to encourage other businesses to follow suit. This space is now nearly fully occupied. Gilbert has also invested in restoring the city’s waterfront and started bizdom to provide seed funding and mentoring to new startups. 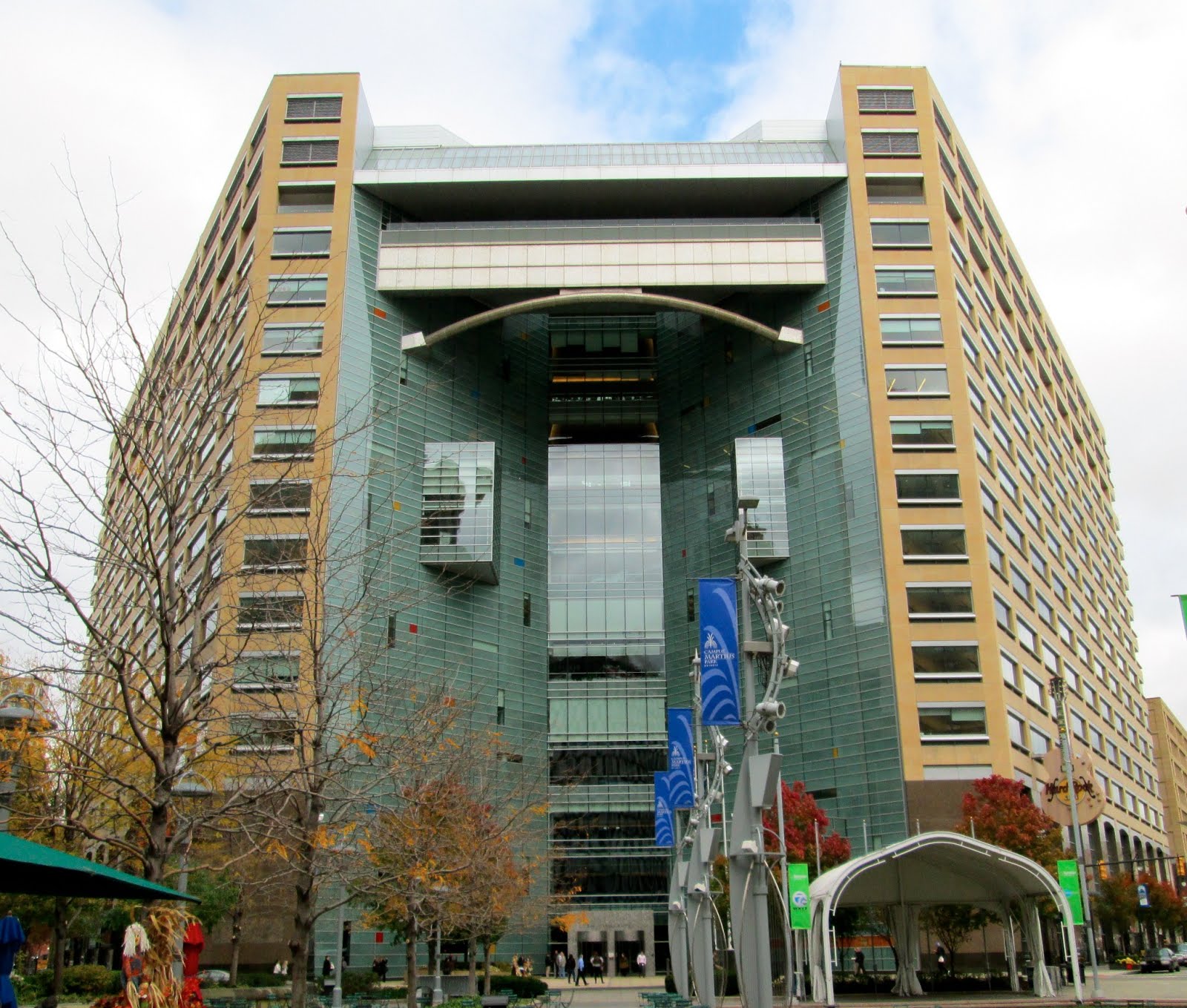 The downtown headquarters of Quicken Loans.

In the article, Gilbert explains his motivations for the investments:

”If you want to attract the kind of brains to grow your business — and there are a lot of them around this area, with dozens of great universities — you need a strong urban core. It’s no secret that people in their 20s and 30s want to be in a vibrant, exciting, urban core. We’re not going to get those people if we’re in a nice building in the suburbs.”

This trend of young people seeking city life has been covered in recent reports and magazine articles. An article in The Atlantic describes some surveys by the National Association of Realtors and the Urban Land institute which indicate that around 60% of 20-30 year olds report that they would prefer to live in walkable urban communities. An analysis of census data also highlights the trend, showing that most of America’s largest metropolitan areas grew faster than their surrounding suburbs in 2010-2011, something that has not happened since the 1920’s. These changing preferences are more than just a matter of fashion, they are driven by powerful economic forces in the modern economy. Enrico Moretti describes three such forces in his book “The New Geography of Jobs” : thick labor markets, specialized service providers, and knowledge spillovers.

In an economy fueled by unskilled workers, its not important whether factories are located in small towns or large cities. If a small town has a surplus of workers and not enough jobs then it would be a good place to build a new factory. A suburb close to expanding factories that are facing a shortage of workers would be a smart place for a job-seeker to move. But when skilled workers are involved the size of the job market becomes much more important for both workers and businesses. Moretti provides a particularly apt analogy comparing a skilled job market to a dating website: would you rather join a site with 10 women and 10 men, or one with 10,000 women and 10,000 men? Because daters are looking for very specific attributes in a mate, they have much better chances finding Mr./Ms. Right in a “thick” dating market that has many buyers and sellers. The same is true for modern tech companies seeking skilled workers to fill specific roles.

In addition to favorable labor markets, cities also have an abundance of specialized service providers such as law firms and accountants that know how to deal with the specific problems a specific industry encounters. And to top it all off, studies of patent citations have shown that information spreads more quickly locally through a city than it does to more distant locations, presumably because of the superiority of face-to-face meetings to long distance communication. These economic forces are powerful. Thousands of high tech firms and startups have moved their offices to New York and San Francisco, paying exorbitant rents and high salaries in order to reap the benefits that come from working in a city. But there is a catch for those who hope to take advantage of these trends to revitalize old cities: it’s a chicken-and-egg problem. Cities only provide these benefits if there is a vibrant hub of high tech companies all working in the same place. It is unclear whether Gilbert’s aggressive investments will be able to overcome this barrier and jump-start an innovation hub in Detroit, but there are some promising signs: Twitter opened a new office downtown in April, and hip bars and restaurants are springing up such as the Grand Trunk Pub which is housed in an old railroad station and serves a wide variety of locally brewed craft beer.

On the tour I met an artist and her studio manager from New York — Kumi and Erik — who stopped to check out Detroit on their way back from artprize in Grand Rapids. They are the type of people that Detroit revitalizationists hope to lure away from the high rents of NYC. While they were not about to pick up and move, Erik was clearly taken by Detroit’s charms, repeatedly noting “they say that Detroit is the most interesting city in America right now”. In addition to the grand architecture and ghostly beauty of the abandoned buildings, his attraction was driven by a sense of frontier opportunity — the relative scarcity of people and development compared to crowded cities like New York leaves more room to experiment with new ideas.  As the tour guide put it, “In Detroit all you need is a good idea to Succeed. In New York or Chicago, you need a good idea plus 5 million dollars”. Later, driving through the city looking for the ruins of an old high school (it turned out that it was demolished in 2011), Erik hit a rare snarl of traffic that blocked our path down a one-way street.  “fuck it, it’s the wild west out here” he let out as he drove the car in reverse back onto a wide boulevard, devoid of cars.

Our first big stop after the tour was the Heidelberg project, an outdoor art project that started in 1986 when Tyree Guyton began decorating abandoned houses on his block with bright paint and found objects. The project is controversial in the local neighborhood as many neighbors consider it a gaudy eyesore, and the city of detroit partially demolished it on two occasions. But these days it has gained considerable fame outside the city, drawing 275,000 visitors from across the world every year. 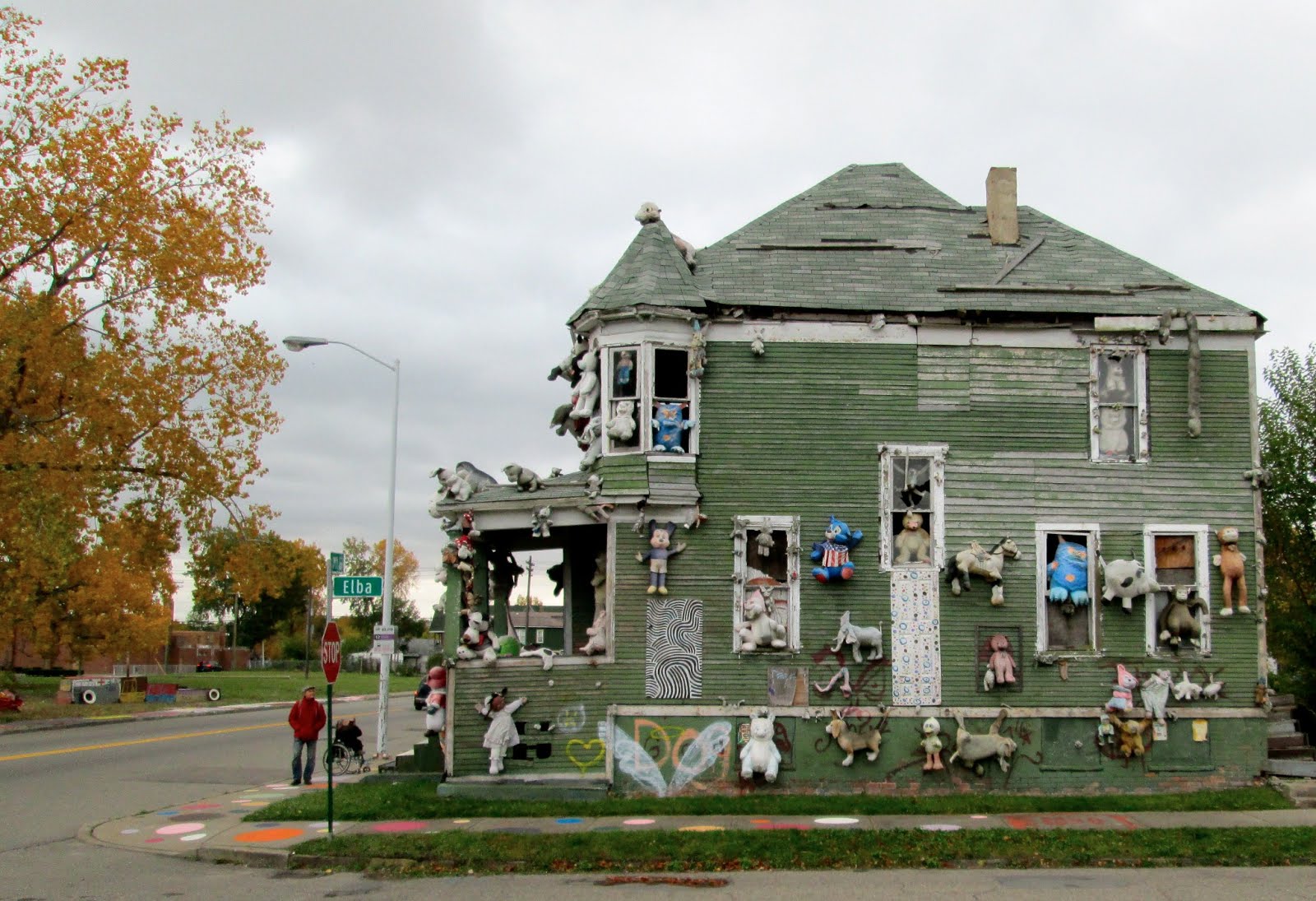 One of the decorated abandoned houses that make up the Heidelberg project.

The project is impressive for its sheer size — stretched out across a city block — as well as its clashing aesthetics of childlike joviality and creepy, ghostly decay. In one house, oversized stuffed animals of the type you might win at a state fair are plastered across the outside wall. A monkey and a cuddly teddy bear stare out from behind a broken window, thier colors faded from exposure to the elements. 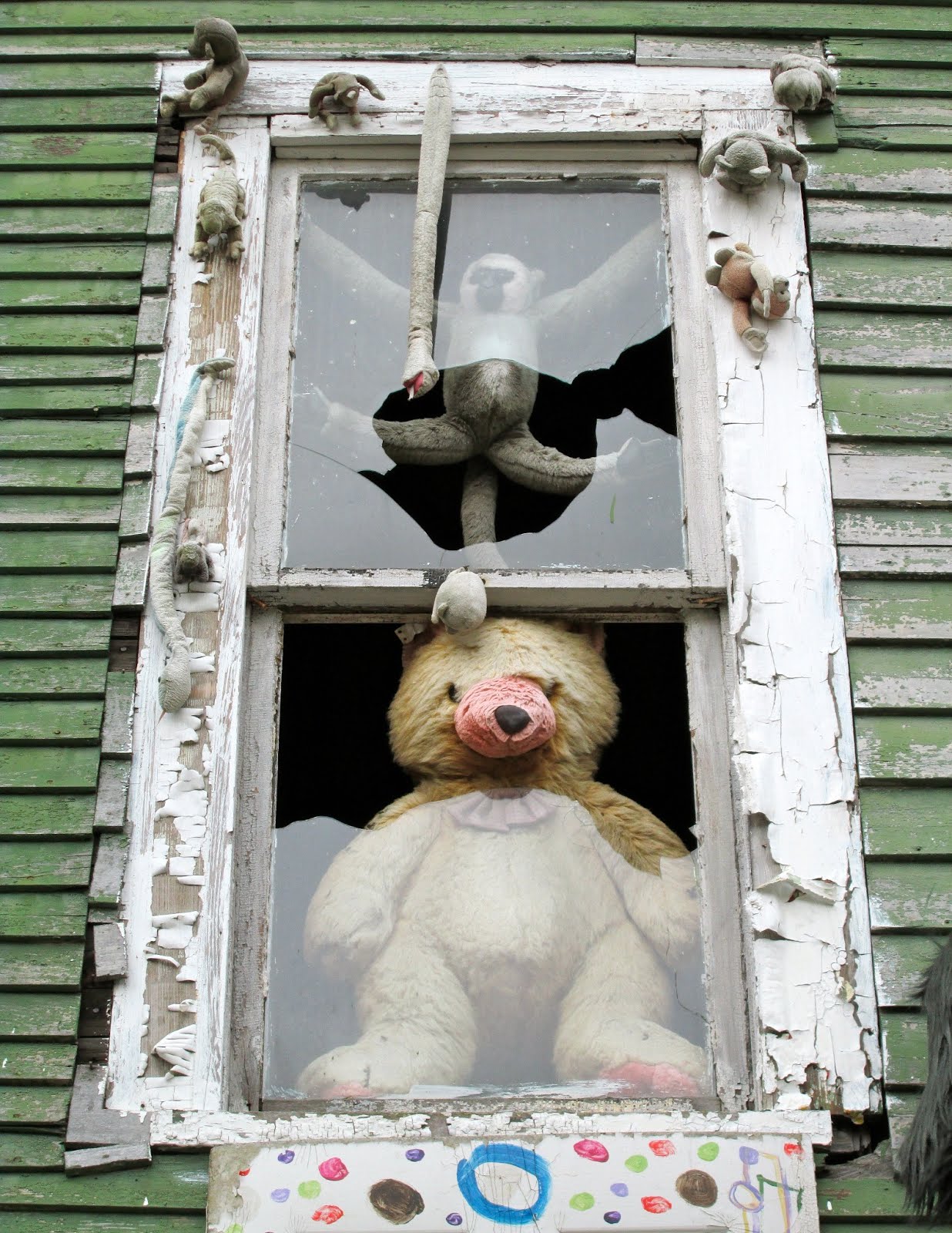 After walking up and down the block, we struck up a conversation with Tim Burke, a detroit artist who maintains a studio in a house at one corner of the Heidelberg Project. After talking shop with Erik about strategies for an art contest in which they both competed, he invited us into his gallery to show us the spoils of many years foraging the city. The objects were multitudinous and fascinating — flawed gears discarded from a factory making F-15 fighter jets, foam offal from a nearby toy factory that resembles large mushrooms, and records from a dentist’s office abandoned in the 1960’s complete with black and white photo strips of the patients and extracted human teeth. Burke integrates these found objects into his artwork. For him, the city has been fertile ground.

The final stop on our tour was the Packard Automotive Plant, a car factory built in the early 1900s by the famous industrial architect Albert Kahn and notable for its early use of reinforced concrete. The factory closed in 1956 and was turned into a multi-use industrial park until 1999 when it was abandoned. After this, vandals and trash dumpers filled the buildings with graffiti and refuse including several old boats and vehicles, and scrappers went to work dismantling and stripping the buildings. Today, the site looks like a scene out of war-torn Europe in the 1940’s. Sections of the building have collapsed under their own weight and the courtyards overflow with rubble. 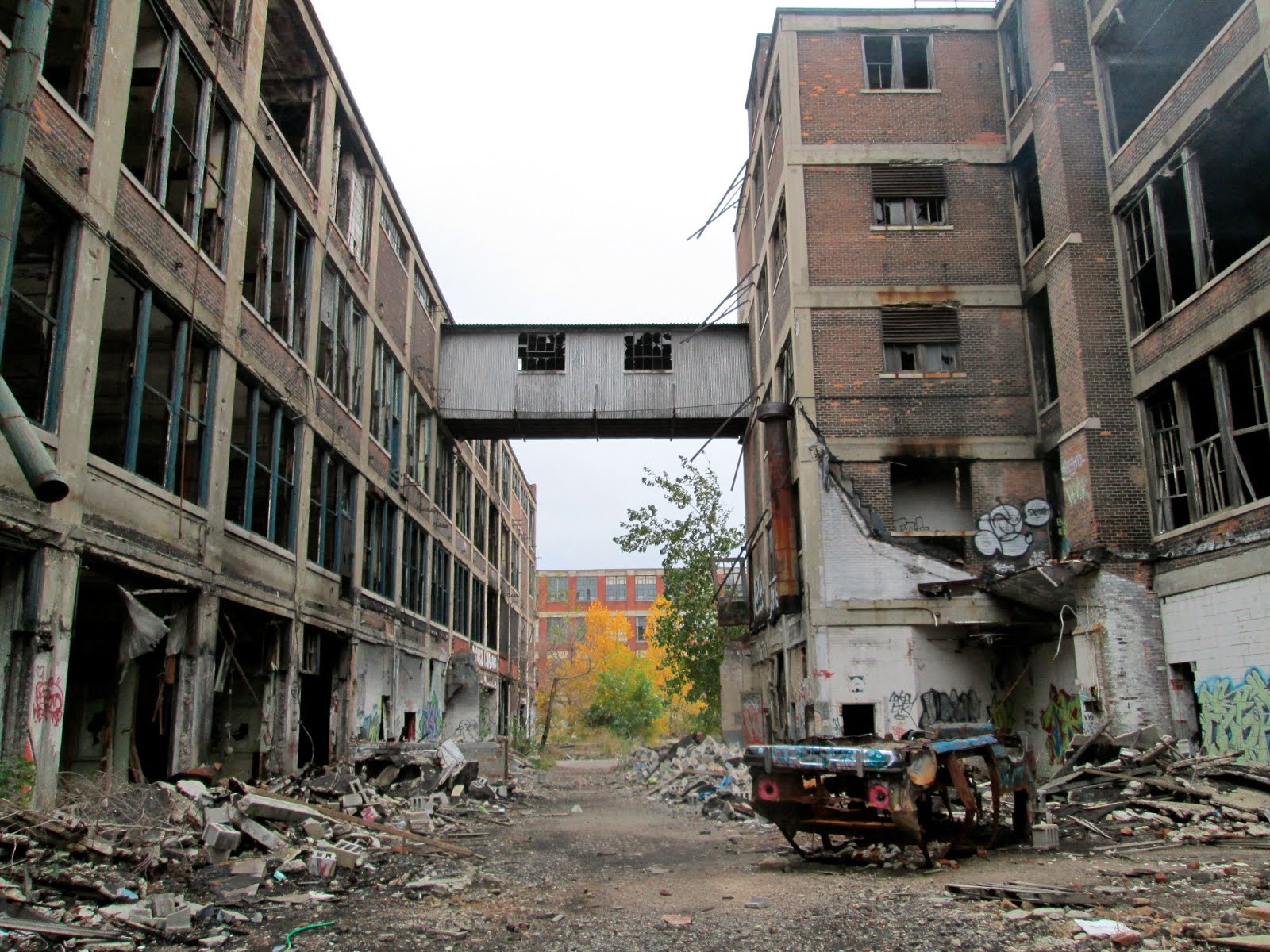 A courtyard of the abandoned Packard Automotive Plant.

In most cities a place like this would be fenced off to keep out trespassers but such a thing would be a daunting task in this section of Detroit because it seems like more than half of the buildings in the surrounding area are unoccupied. As we walked through one of the many courtyards, smoke wafted out of a third-floor window. Climbing the stairs to take a look, we found small fires scattered across the concrete floor burning unattended. Fires at the Packard plant are common, and the fire department no longer intervenes.

Small fires smolder on the 3rd floor of a building in the Packard Automotive Plant.